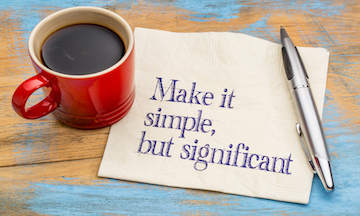 Everything should be as simple as it is, but not simpler.

Everything should be as simple as it is, but not simpler. – Albert Einstein

There are at least 200 working days a year. If you commit to doing a simple marketing item just once each day, at the end of the year you’ve built a mountain. – Seth Godin*

Simple can be harder than complex: You have to work hard to get your thinking clean to make it simple. But it’s worth it in the end because once you get there, you can move mountains. – Steve Jobs 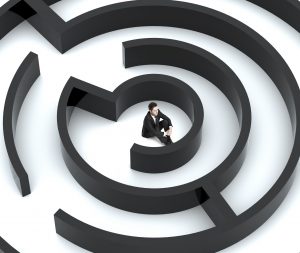 Our world already has too many choices. I can remember when we only had the telephone to contact people. In fact, when we needed to call long distance, we needed to have the operator place the call. It was a big deal when we could dial 1 to make a long distance call. Then we got FAX machines. We could send documents over phone lines. This saved sending packages by special delivery mail. Then, the next big deal was email! This was an amazing breakthrough allowing us to communicate with people around the globe. Then came pagers. Then we got cell phones. Then came texting. We kept adding things and not taking away anything. More is not better.

We are bombarded each day with so many messages that it’s difficult to discern what’s important.

We live in a mostly over-stimulated world.

In music masterworks, some of the most profound moments are those with complete silence or a passage that’s pianissimo, following a loud, dramatic passage. There’s unique power in the quiet times and the times of silence.

It’s in silent, quiet times that the presence of God is most felt, not in noisy praise sessions.

It’s the leader’s duty and delight to pay attention to what’s happening and how it happens and separate the noise from the essential messages.

It’s the leader’s job to make the complex simple. This is not a simple task. Cutting through the noise and confusion takes focus, concentration, and a lot of effort. Like the Jobs quote above points out, it’s hard work making things simple.

When I was a young piano student, I heard Van Cliburn play a solo concert in Atlanta, Georgia. I was so impressed that he made playing the piano seem easy. It appeared easy because he had practiced. He had done the hard work. He had prepared in order to release his creative energy in performance. Mozart’s music is seemly simple, however it’s so transparent that every note is exposed. It’s delicacy in motion. It’s difficult, not in playing lots of notes, but in precision. Paderewski was known to have said that playing Mozart was simple for the student and very difficult for the teacher. In other words, the simple is difficult.

We want to hide behind complexity as leaders to protect our deficiencies, our insecurities, and our lack of knowledge. Leadership is identifying our gaps. Leadership is asking questions and not knowing all the answers. Leadership is about integrity, honesty, and open communications. We get things done and we know how things get done. If we don’t know, we find out how.

When the musical conductor prepares for a rehearsal, they spend 2 to 3 hours preparing for each hour of rehearsal. There’s no substitute for preparation.

To get to simple takes work. It takes lots of work. The complexity of leadership is in being able to make things simple so others can follow.