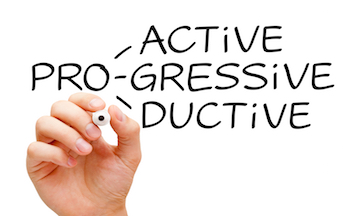 The possibilities are numerous once we decide to act and not react.  George Bernard Shaw

We want to identify and solve problems instantly, when, in fact, we are not really sure what the problem really is.

Our reaction is to solve problems and to move ahead, rather than creating a process to respond.

Responding is a thinking state, while reacting is an emotional state.

Making emotional decisions is the default of an ineffective leader.

Making thoughtful decisions is the decision of an effective leader.

As responsible leaders, we get to choose.

Yes, there is a difference. Is been said that the difference in reacting and responding is about 10 seconds. Our normal animal behavior is to react to defend ourselves. The learned response is from our developed cortex brain. We must learn to override our instincts to react by thoughtful and intentional strategies for responding to whatever comment or situation that has prompted our attention. Reacting is following another person’s lead, it’s not leading. Taking charge of the situation is leading. The leader defines the culture, the terms of engagement and the anxiety level by their thinking. Reacting is typically not a thinking interaction. Leaders often make a situation worse by reacting.

Being an enlightened and effective leader is not what we are born with. We learn leadership skills. Much of what we have learned is causing us problems and its time unlearn those things and replace them with what works.